Hi,
I’m experimenting with a PoC to set up an environment that works with hibernate multitenancy support end-to-end. It’s a spring-boot app with the latest axon-framework version without axon-server.
It was pretty straightforward to set it up with the Subscribing event processor because everything is handled in one thread so both the EventStore and readModel in event handlers have access to tenant identifiers and its also easy to keep a separate EventStore per tenant.

Now I’m trying to replace subscribing event processor with a tracking one. I found out that MultiStreamableMessageSource was designed to support multiple event sources and combine them into one.
Based on that I was able more or less to implement something like shown in the picture A bellow.
However, I see two disadvantages:

I’m not sure if it’s possible and how to configure multiple TrackingProcessors to work with the same Class that implements @EventHandlers.
I can find a lot of information on how to connect multiple EventHandlers to one Tracking processor but not how to do it vice versa.

but config only allows to register a name, eventStore and config class:

Any help would be appreciated. 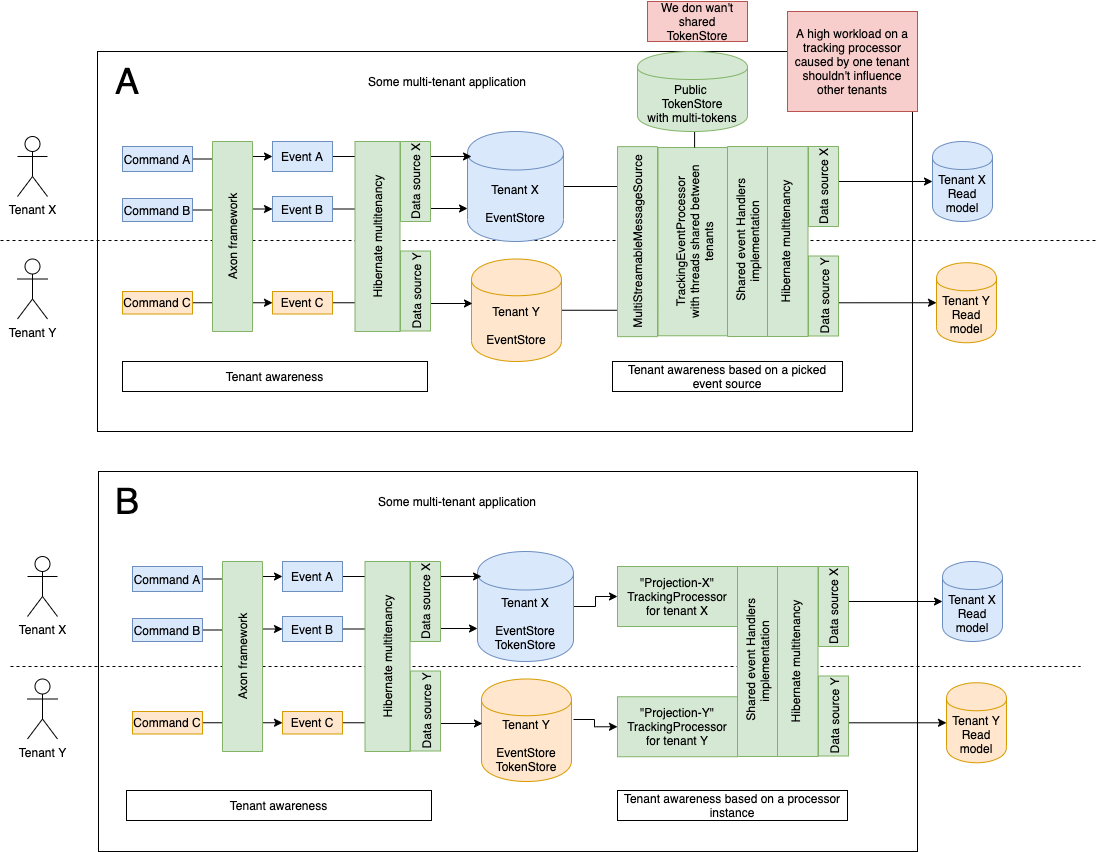 You haven’t found this information as the general approach to registering Event Handling Components is that it belongs to a single Processing Group.
In turn, it is the Processing Groups which can be paired under a given Event Processor, creating a hierarchy where the TEP really is in charge of:

Key here is to look at the EventHandlerInvoker, which is the wrapper around 1…n Event Handlers.

It’s this EventHandlerInvoker which is configured on the AbstractEventProcessor (which the TEP implements).

Might it not be simpler to just provide several instances of the Event Handler, per tenant to service?
I understand that it increases the numbers of Event Handling Components quite some, depending on how many tenants you want to serve on this one application of course.

By the way, the multi-context support in Axon Server is pretty often used to allow for multi tenant support within your Axon applications.
Might be worth having a look at that, if this proves to be too big a configuration effort.

PS. It is important to note that this mailing list will be discontinued as specified in this thread.
The thread also specifies where to look further for help when it comes to Axon.